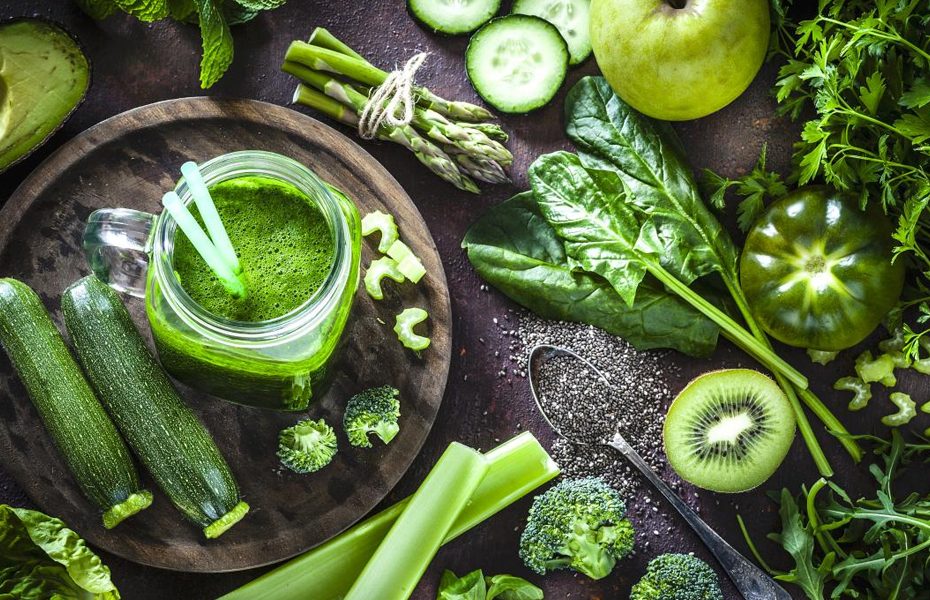 Chlorophyll is the green pigment in all green plants and in cyanobacteria, responsible for the absorption of light energy for photosynthesis (the process through which green plants manufacture their own food). It has a molecular core bearing a porphyrin structure but contains magnesium at its centre and a long carbon side chain. This structure is very similar to that of haemoglobin which is a very vital element of the human blood with the only exception being that haemoglobin has iron at the centre of its core. This unique quality allows liquid chlorophyll to perform the same function as the blood in the human body.

Chlorophyllin, a derivative of chlorophyll concentrate is water soluble and is used as an alternative medication.

So how would you feel if I told you that chlorophyll concentrate is not only a wonder maker in plants but can also do the same for your body? What if I further said that plant cells store the sun shine and make it available for our consumption? Alongside with the vitamin D that we get from sun rays, we are now able to consume sun shine through the generosity extended to us by chlorophyll concentrate in the plants. There are different types of chlorophyll among them chlorophyll A and B with A being the widely present in most plants.

What is the nutritional value of chlorophyll concentrate?

With magnesium at the centre of its core, it’s no doubt that chlorophyll concentrate is rich in minerals. Not only magnesium but also other important minerals like potassium, calcium and iron. Chlorophyll concentrate also contains a range of vitamins among them vitamin E, vitamin C, vitamin K, vitamin A and beta carotene. Chlorophyll is also a rich source of antioxidants and important fatty acids. At a glance, it is only right and true to conclude that the green colouring pigment is a super food packed a range of powerful and essential nutrients.

Red blood cells – as earlier mentioned, chlorophyll concentrate has the same molecular structure as haemoglobin in the human body. It is due to this similarity that chlorophyll aids in the restoration and replenishing of the red blood cells. It is laced with live enzymes that play a major role in cleansing of blood which in turn enhances the ability of blood to carry more oxygen through haemoglobin. This is achieved as chlorophyll works at both cellular and molecular levels to regenerate the human body. This factor is instrument in eradicating and fighting anaemia which is caused by lack of enough red blood cells in the body

Antioxidant properties – some of the diseases we suffer from are as a result of oxidation stress cause by free radicals. Strong antioxidant capacity coupled with essential minerals have seen to it that chlorophyll is capable of neutralizing harmful molecules and guard against the free radicals which would otherwise tamper with our DNA and cause age related complications.

The presence of these antioxidants together with magnesium work hand in hand to ensure you have a healthy and youthful skin. The vitamin K in chlorophyll concentration sees to it that the adrenal glands are clean and rejuvenated. This characteristic concludes that chlorophyll concentrate is one of the best anti-aging elements that we have.

Inflammation is at times a result of some bacteria. Painful complication like arthritis and fibromyalgia can now be treated be chlorophyll and its derivatives as they interfere with the growth of these bacteria.

Our bodies have small quantities of a yeast called candida which when it overgrows leads to a medical complication referred to as candida albicans. An alkaline based solution has a healing effect on candida albicans. This proves that chlorophyll concentration has effective antimicrobial properties.

Magnesium, which is a highly alkaline mineral, is a major component of chlorophyll concentrate. This makes chlorophyll concentrate alkaline thus aids in balancing the acid-alkaline ration in the body. Magnesium is also responsible for cardiovascular health and healthy functioning of the kidneys, muscles, liver and the human brain.

Magnesium, being the central part of chlorophyll, in line with other nutrients such as vitamin d and calcium play a major role in formation and maintenance of strong bones and muscles. Magnesium in chlorophyll concentrate is instrumental in muscle relaxation and contraction and also responsible for muscle toning.

Vitamin K is known for initiating the blood clotting process. Chlorophyll concentrate is a rich and natural source of Vitamin K. It is therefore not surprising to find that persons who often nosebleed and females with heavy menstrual bleeding require a lot of vitamin K present in chlorophyll concentrate.

Vitamin K is an essential compound in urine and acids in reducing the growth of calcium oxalate crystals thus chlorophyll concentrate aids in preventing the formation and growth of kidney stones.

Chlorophyll concentration readily avails vitamin E which is essential in hormonal balance in both sexes as it stimulates the production of testosterone in males and oestrogen in females.

Pancreatitis is associated with fever and abdominal pain. Chlorophyll alleviates these discomforts without causing any side effects and is therefore administered intravenously in the treatment of chronic pancreatitis.

Dental problems such as pyorrhoea have been successfully treated using chlorophyll concentration and its derivatives as they cure oral infections and calm inflamed and bleeding gums.

Respiratory infections and conditions such as colds, rhinitis and sinusitis have been treated effectively with chlorophyll concentrate.

Just as the greenness in our plants, the chlorophyll concentrate we introduce to our bodies have a calming effect and has therefore been known to reduce symptoms of insomnia such as nervous irritability and general body fatigue. With the right amounts of chlorophyll concentrate in your body, you are more than assured of a peaceful and relaxing sleep.

Pregnant and nursing women should ensure they get a prescription from their doctors.

Well well well, I have to agree I fell quite amazed and even privileged to know that not only can I bask in the sun for vitamin D and a tan, but I can also have a taste of sunshine. With all the chlorophyll concentrate benefits you stand to gain as you introduce this natural compound in your body, you are rest assured that nothing stands between you and good health. All the best in your healthy life!!!!